Entrance to Paris – Hotel Carnavalet, one of the finest in the city and containing one of its most interesting museums, is at no. 23 Rue de Sevigne. Constructed in 1544, it was rebuilt in Renaissance forms in 1655 by Francois Mansart, who added a floor and gave it its present appearance; it also contains some fine statues by Jean Goujon.

In 1677, the building was rented by the writer Marie de Rabutin, better known as the/ Marquise de Sevigne, and in the 19th century the Museum was opened, containing historical documents of great importance and rarity related to the history of Paris, seen through its historical figures, monuments and costumes, from Henri IV to our own time.

Passing through the main entrance (16th century — the lions and the cornucopia on the keystone were carved by Jean Goujon), we reach the courtyard, in the centre of which is the bronze statue of Louis XIV, by Coysevox (1689).

The building at the end is still in Gothic style, while the reliefsof the Four Seasons are Renaissance, the work of the school of Goujon. 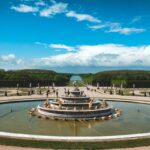