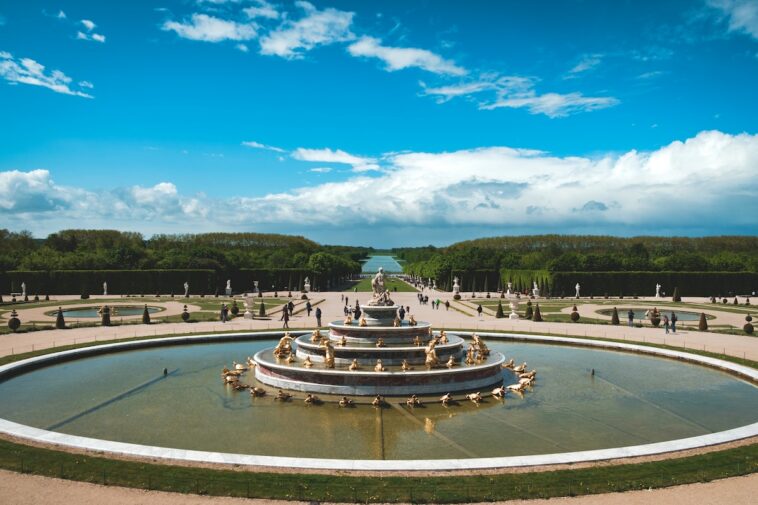 Situated about 14 miles south-west of Paris, Versailles at the time of Louis XIII was no more than a modest hunting lodge, built in 1624 and consisting of a simple square building with the present-day Marble Court in the centre.

The creation of the great palace of Versailles was due to Louis XIV, who after the Fronda incidents decided to abandon Paris and transform his predecessor’s simple hunting castle into a royal palace worthy of the splendid sovereign he wished to be. In 1668 Le Vau enlarged the original building to twice its size, giving it a wide facade on the side overlooking the park. The work of transforming the palace continued for a long time, under the direction of the other architects Hardouin-Mansart and Le Notre. The latter concentrated mainly on laying out the great gardens.

On 6 October 1789, the royal family returned finally from Versailles to Paris in their gilded carriage, after a procession of market women had marched on the palace in an unprecedented demonstration. Without the royal court, the castle fell into a state of nearly total abandon, being sacked many times and robbed of many of its works of art, until in 1837 Louis-Philippe restored it and converted it into a museum of French history.

Occupied by the Germans in 1870, it was the scene of the coronation of William of Prussia as emperor of Germany. In 1875 the Republic of France was proclaimed and in 1919 the peace treaty with Germany, putting an end to the first world war, was signed there.

Access to the second courtyard, the Royal Court, was permitted only to the carriages of the royal family: this has the Gabriel Wing or Wing of Louis XV on the right and the Old Wing on the left. Finally, there is the third courtyard, the Marble Court, surrounded by the original building, the castle of Louis XIII, with its red bricks alternating with white stone.

The three windows behind the balcony in the centre belonged to the king’s bedroom: it was from here that, on 1 September 1715, at 8,15 in the morning, the death of Louis XIV was announced; on the same balcony, 74 years later, Louis XVI appeared to placate the people who wanted him to return to Paris.

Through an arcade in the Royal Court, the western facade of the palace, the most famous and most splendid facade, is reached. More than 1700 feet long, it overlooks the pleasant gardens. The central, projecting part was designed by Le Vau, while Hardouin-Mansart designed its two elegant wings.

Each part consists of two orders, the lower of rusticated arcades and the upper of pillars, with pilaster strips and high windows. Above these again is a balustraded attic, in which were the apartments of the various members of the huge court, whereas the central part and two wings were where the family of the king and the royal princes lived.

Interior. The interior is reached from the Royal Court by way of the Gabriel Wing. After the two vestibules comes the Historical Museum, with its eleven rooms illustrating the eras of Louis XIII and Louis XIV. At the end of the first gallery, via a stairway, is the entrance to the Opera, designed by Gabriel in 1770 for the marriage of Louis XVI and Marie-Antoinette: it is an oval-shaped chamber, with fine wood inlays and gilding on a blue background.

Moving up to the first floor, particular attention should be given to the Chapel, built to a design by Hardouin-Mansart between 1698 and 1710. It has three aisles, square pillars on which the arcades rest, and above them a gallery with fluted columns.

From the Chapel, we reach the Hercules Saloon, vestibule of the Great Apartment of the King, consisting of six Saloons richly decorated with stuccoes, polychrome marble and tapestries. Here the sovereign received the court three times a week, from six until ten o’clock in the evening.

The saloons take their names from the various mythological subjects painted in the frescoes on the ceilings: thus the Abundance Saloon is followed by the Venus Saloon; the Saloon of Diana (with a bust by Bernini depicting Louis XIV), which was the billiard room; the Mars Saloon, used as a ballroom, with a magnificent Gobelins tapestry representing the entrance of Louis XIV into Dunkirk; the Mercury Saloon, once a games room, where the body of Louis XIV lay in state for eight days; the Apollo Saloon, the music room, though during the day it became the throne room.

Through the War Saloon, with its cupola painted by Le Brun and with a fine stucco medallion by Coysevox depicting Louis XIV on horseback, we reach the celebrated Hall of  Mirrors. A masterpiece designed  by Hardouin-Mansart and built between 1678 and 1684, it is 246 feet long and 33 feet wide and its ceiling is decorated with paintings by Le Brun illustrating French victories.

Seventeen large windows look out onto the park, corresponding to the same number of windows on the wall opposite; at the time of Louis XIV, the hall was illuminated in the evening by the light of 3000 candles. It was also embellished with tapestries, statues and orange trees in silver vases. At the end of the Hall of Mirrors is the Peace Saloon, so called because of the oval painting over the fireplace depicting Louis XV bringing Peace to Europe (Lemoyne,  1729).

Next to the Hall is the Suite of the King. This consists of the Council Chamber, where Louis XIV used to work with his ministers; the King’s Bedchamber, decorated with white and gold wood, where Louis XIV died; and the famous Bull’s Eye Saloon, in which the court dignitaries every morning and evening were present when the king rose and went to bed. Splendid too is the Private Suite of the King, in the Louis XV style.

Returning to the Peace Saloon, we pass on to the Suite of the Queen, built between 1671 and 1680. It consists of the Queen’s Bedchamber; the Saloon of the Nobles, with the original furniture which was there in 1789; an Antechamber, with magnificent Gobelins tapestries and a portrait of Marie-Antoinette, by Vigee-Lebrun; the Queen’s Guards’ Room, where on 6 October 1789 a group of insurgents from Paris killed several guards who were defending Marie-Antoinette. From this room one can visit the six small rooms in pure Louis XVI style which make up the so-called Private Suite of the Queen.

Then, by the Queen’s Staircase, designed by Hardouin-Mansart, we reach the Great Guardroom, in which there are two works by David, representing the Coronation of Napoleon and the Distribution of the Eagles, and one by Gros, representing Murat at the Battle of Aboukir. Nearby is the splendid Battle Gallery, built by Louis-Philippe in 1836: it takes its name from the paintings illustrating the most famous battles in France’s history, among them the Battle of Taillebourg, painted by Delacroix. Again by way of the Queen’s Stairway, we go on to the rooms on the ground floor, decorated in Louis XIV style, with paintings from the  reigns of  Louis XV and  Louis XVI.

These are considered the prototype of the French-style garden because of their elegant style, full of artistic and scenographic inventions. The gardens were designed by Le Notre between 1661 and 1668 and occupy an area of nearly 250 acres.

The best panoramic view is without doubt from the terrace: at its ends are the two fountains, the fountain of Diana on the right and the Point-du-Jour fountain on the left, surrounded by bronze statues. On one side of the terrace are the northern flower beds with basins and statues, among them the Venus with the Tortoise, by Coysevox, a copy of the classical Knife-grinder, and the so-called Fountain of the Pyramid, by Girardon. Nearby the basin of the Nymphs of Diana and the Allee des Marmousets, a double row of 22 basins adorned with bronze putti from which the fountains spurt: this takes us as far as the Basin of the Dragons and the Basin of Neptune (1740).

On the south side of the terrace are the box-edged southern flower beds. From the balcony can be seen the Orangerie, which contains 3000 trees (oranges, almonds and pomegranates). Each year more than 150,000 types of flowers were planted there. Nearby are the great Stairways of 100 Steps and the Swiss Lake, made between 1678 and 1682 by the Swiss Guards: at the end of it is a statue by Bernini representing Louis XIV, which Girardon transformed into the statue of Marcus Curtius.

From the central terrace, we descend to the Basin of Latona, a masterpiece by Marsy depicting the goddess with her children Diana and Apollo, dominating the concentric basins which ascend in the form of a pyramid. This fountain stands at the beginning of the long avenue called the Tapis-Vert (Green Carpet), at the other end of which is the great Basin of Apollo. In it Tuby depicted the god’s chariot drawn by four horses emerging triumphant from the water to illuminate the sky, while the tritons blow into their shells to announce Apollo’s arrival.

Behind this sculptural group a vast area of green stretches out, interrupted by the Grand Canal (more than 200 feet wide and more than a mile long), which is in turn met halfway along by the Small Canal. There are groves, pools and fountains all around: the Dome Grove, by Hardouin-Mansart, the Obelisk Grove, by the same designer, the grove of the Apollo Baths, the Basin of the Putti, adorned with sculpture done by Hardy in 1710, and the Enceladus Basin, with the statue by Marsy depicting the giant who was crushed  under a  mountain of rocks.

This is another impressive example of the luxury and the sumptuous life which the court led at Versailles.

This building was erected in a corner of the park of Versailles for Louis XIV, who used to say that the Trianon had been made for him, whereas Versailles was for the court. It was built by Mansart in 1687 in the classical forms of an Italian palazzo: with a single storey and large windows with Doric pilasters between them, the whole structure made from delicate pink marble. Against the architect’s advice, Louis XIV also ordered the construction of the peristyle with columns and pillars which unites the two wings to the rest of the building.

Built by Gabriel for Louis XV in 1762, it is considered the palace of the royal mistresses of France. Madame de Pompadour died there in 1764 and it then became the king’s favourite place for spending his free time with the Countess du Barry. Louis XVI made a symbolic gift of it to Marie-Antoinette and Napoleon gave it to his sister Pauline. With its simple facade and graceful columns, elegant style and fine proportions, the building can be considered the first example of the Neoclassical style. Inside it retains the furniture which belonged to Marie-Antoinette.

In the garden arounds the Trianons, it is worth paying a visit to the small Temple of Love, built in 1778 by Mique, with twelve Corinthian columns and a cupola, beneath which is the statue of an adolescent Cupid, and the Queen’s Hamlet, a picturesque imitation rustic village, with thatched cottages, a dairy and a mill, once driven by the waters of a small stream. Designed by the painter Hubert Robert between 1783 and 1786, this was Marie-Antoinette’s favourite place, where she often came to spend time in the open air, pretending to be a simple country lady.