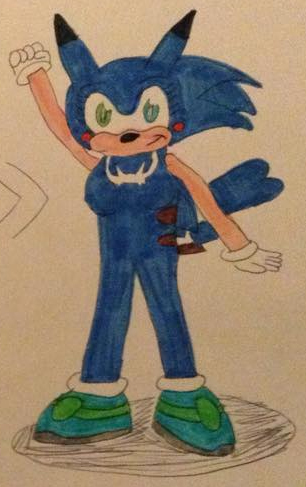 Control over his Characters

Hanging out with Sonichu.

Defeat Slaweel and kill anybody who opposes him (succeeded).

Chris-Chan / Christ Chan / is the protagonist of the infamous webcomic known as Sonichu by internet user Christian Weston Chandler. Despite the narrative setting him up as the hero of the webcomic, he has repeatedly shown himself to be incredibly violent, murdering people simply because they offended him, along with being a lecherous, and all-around awful person. He was also once a homophobe before coming out as trans himself and becoming Christine Chandler. He is a fictionalized version of the comics’ author.

Chris-Chan, as presented within the comic, is the mayor of CWCville (pronounced as Quickville), as well as the father figure of Sonichu. The comic mostly consisted of him trying to find a “boyfriend-free girl” (single) and making several threats to everyone that he comes across that he views as a threat. For example, as the webcomic progressed, Chris-Chan would systematically order his “son”, Sonichu, into committing mass purgings of his critics, homosexuals and Internet trolls. His knowledge on leadership is incredibly poor, as he rules CWCville in a very dictator-type fashion as “mayor”. It could be stated that he is a dictator himself, due to his very aggressive views on homosexuals, black people, Internet trolls and people who offended him in some way. It was once a crime in CWCville to be homosexual, but this was rescinded in later issues.

With every murder that he commits, he continually depicts himself as being almost akin to a god (to the point where his characters briefly considered worshiping his “ultimate” form, Colossal Chris-Chan); in addition, he often demonizes people for seemingly minor offenses, such as being a mall security guard. Chris is often described by sites such as KnowYourMeme to be a ruthless dictator, and Sonichu could be said to be his chief enforcer rather than his sidekick.

His most notable villainous act was his response to the Asperchu crew (who had made fun of Sonichu in the webcomic of the same name) murdering Simonla Rosechu with a Voltorb (when all they had done was ask Chris to remove Simonla from the comic, due to her being a ripoff of the parody character Simonchu). Chris blew up the “4cent garbage” building the trolls were using, which killed many people within the building.

Chris then set up a mock trial for the four, not giving them the right to a lawyer (being forced to represent themselves with one of their members, who was described as being “high as a kite”), as well as hiring a prosecutor and setting up a jury that were both heavily biased against them.

Rather than grant them a merciful execution after finding them guilty, Chris instead proceeded to gruesomely execute and torture the four along with his Pokemòn-hedgehog creations, using an electric chair that reduced Alec to a burnt husk as the hedgehogs told him to go to Hell, torturing Evan to death by forcing a week-old girl with the mind of a fourth grader (who was forcibly evolved to take the place of her mother) to do the deed with him, Sean being tied up, while a firing squad that shot him to death at point-blank range, and last, but not least tearing Mao limb from limb with physic abilities.

However this event was later retconned into the four being exiled to an amish village and 4cent garbage not being blown up.

Overall, despite his attempts to present himself as a savior to his town, he continually shows himself as being a perverted and wrathful dictator. 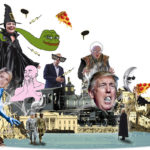