There are 332,515,715 people in the United States of America. If everyone in the U.S. lined up single file, the line would stretch around the Earth almost 7 times. That’s a lot of people.

The U.S. Census Bureau statistics tell us that there are at least 151,671 different last names and 5,163 different first names in common use in the United States. Some names are more common than others. 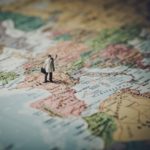